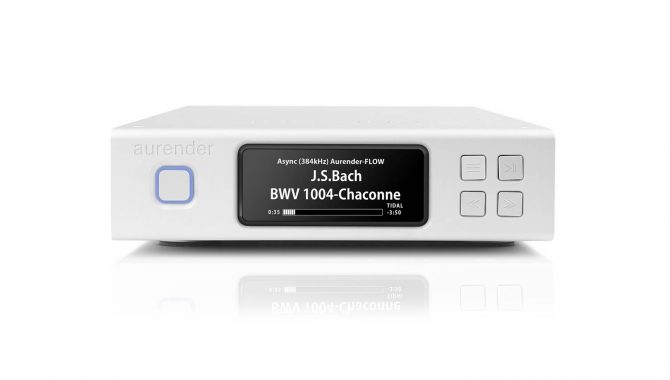 Equipped with a 2TB HDD (4TB option available), high performance USB  & SPDIF RCA digital outputs, Ethernet port, 120GB solid-state drive for cached playback, the N100C is the ideal solution for playing high resolution digital music collections, all from a slim and sleek chassis that will integrate into your room with ease.

If you own a computer audio system, you know that time spent fussing is time lost listening.

Consider the alternative – the Aurender N100C seamlessly replaces your aging computer. Your music will now be stored on the N100’s internal hard drive, available in either 2TB or 4TB capacity with a 120GB solid state (SSD) caching drive performing all file playback for superior fidelity and reliability. Management of your digital music library and Tidal lossless streaming service is simple and intuitive, thanks to our award-winning Aurender Conductor app. And all major digital file formats are supported at native bit and sampling rates.
Housed in beautiful machined aluminum casework, the N100C will compliment your existing system components and deliver a new level of musicality you have to hear to believe.

The N100H digital music player incorporate technology derived from our best-in-class models. For example, the solid-state (SSD) 120GB caching drive for playback eliminates latency and the potential of drop-outs often associated with using IT storage devices like NAS and USB drives for music playback. And our dedicated high-performance Audio 2.0 USB digital audio output features ultra low-noise power circuitry to deliver a pristine digital stream to the connected DAC. The N100C greatly benefits from “trickle down” technology from our far more expensive models making them both deliver audio performance that belies their cost.

After a song or album is selected from the Aurender Conductor App, that specific song or album is cached to the 120GB SSD from the internal HDD and the N100 will then playback from the SSD. This minimizes wear and tear on the HDD drive as after loading to the caching drive the HDD goes idle. Additionally, by caching songs to the SDD for playback, it eliminates any sound quality degradation and even drop outs due to a non-optimal network connection from for example, a NAS drive to the Aurender.

For WiFi network connectivity, streaming, upgrades and file transfers, both N100H and N100C have a Gigabit Ethernet Port along with two USB 2.0 data ports for copying files from a USB HDD or USB thumbdrive.

Loading music into your Aurender is simple and easy. You can choose between one of two methods depending upon where you digital music library currently resides. If your music is on a USB storage device, simply plug it into one of the two USB ports on the rear panel and from the Aurender App select “Copy All to Aurender”. If your music resides on a NAS, you will need to attach the drive internal to the Aurender to the network using a computer. Once the folder for the internal drive is visible on your desktop, you may transfer music into it by cut and paste or drag and drop. Alternatively, for either method, if you just wish to transfer just specific folders, Smart Copy can be performed using the Conductor App.

The Aurender Conductor App Takes Control Of Your Music

The Aurender Conductor App turns the iPad or Android phone* into a highly versatile user interface for Aurender Music Servers and makes managing, viewing, playing and streaming high-resolution music collections a breeze. All permissions, behaviors and functions of the Aurender Music Server / Streamer can be easily accessed through the Settings menu of the Aurender App.
Embedded within the Aurender App are the Lossless Streaming Services Tidal, Qobuz, Bugs and Melon (subscription required, check your region for availability). When using a service, Aurender handles the streaming content the same way as files stored internally, so all functions and operations are the same with either library. In fact, it’s easy to combine streaming content into your library of files making all content appear to be one in the same.

The Aurender Music Servers can play content from a NAS using file/folder browsing. With the scanning of your NAS with AMM for PC/Mac (download from Aurender website), the N100 series and all other Aurender Music server series will display all meta-tag information and album cover art of the NAS’s contents the same way as the content stored internally on the Aurender.

The dedicated USB Audio Class 2.0 output is designed to deliver an exceptionally transparent audio signal free of noise and is shielded from outside electronic interference.

Sending a Remote Support Request using the Aurender Conductor App allows engineers to quickly diagnose and fix problems over the Internet, should they occur.