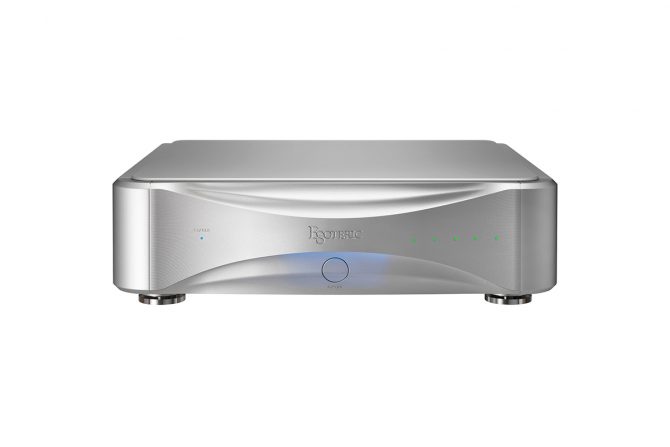 Utilizing Esoteric engineers’ expertise in the development of discrete technologies
has resulted in the introduction of the New “Master Sound Discrete Clock.”

While other high-precision clock modules may utilize such materials as rubidium or cesium, surprisingly what is not so well known is that their clock signals are output from internally synchronized crystal oscillators. With over twenty years of intensive research into audio clocks, Esoteric focused on the fact that the fundamental design of this core crystal oscillator circuit can have a significant impact on the overall timbre of the assembled audio components. When voltage is applied, the clock’s crystal resonates at a fixed frequency that serves as the source of its high-accuracy clock signal. Because of this, the crystal’s physical characteristics, such as size, cut shape, and surface treatment, can all have a significant effect on frequency accuracy and ultimate sound quality. The Master Sound Discrete Clock was designed with a singular focus on the crystal oscillator and its circuitry, which till now has been packaged as a general-purpose module that utilizes a unique discrete circuit to improve the quality of musical expression.

From its high-accuracy oscillator circuitry to the core crystal oscillator itself, the new Master Sound Discrete Clock is a completely custom-made component produced exclusively by Esoteric. The material forming its crystal provides a more natural tone quality, extremely low phase noise, and exceptional stability when used in combination with the G1X’s advanced temperature control system. Since quartz crystals generate their clock signals through vibration, or resonance, there is a profound correlation between the physical characteristics of the base material and ultimate sound quality. Larger crystals tend to produce a higher drive level that is less easily affected by high resistance within the circuit. They also produce a more stable oscillation. Therefore, every detail in the manufacturing process, from cut shape to size, was carefully examined in pursuit of creating an oscillator that offers the best electrophysical characteristics for ultimate sound quality. Based on a highly reliable variety of quartz crystal developed for the aerospace industry, Esoteric was able to complete the development of its exclusive musical reproduction-dedicated SC1 crystal. The crystal material itself is grown slowly over an extremely long period of time, and then SC (Stress Compensated) cut into its final shape. To ensure optimal control of its resonant vibration, Esoteric proudly introduces the largest sized mass-produced crystal in its class, carefully selecting and utilizing only those pieces whose centre frequency fluctuations are within Esoteric’s strict standards.

Since the frequency accuracy of a crystal can change drastically due to the influence of ambient air temperatures, temperature control is the most important factor in maintaining a clock’s highest possible accuracy. Esoteric’s exclusive Master Sound TC is a total temperature control system designed to maximize the performance of the crystal oscillator. Not only the physical hardware, but also its control software is designed and manufactured in-house, ensuring that the G1X Master Sound Discrete Clock achieves the ultimate in audio performance.

In most conventional OCXO circuits, the crystal is kept in a compact oven at an appropriate temperature of approximately 85°C. However, since the temperature at which a crystal exhibits its best performance can vary widely from one crystal to the next, it has been common until now to correct for any clock frequency error using a supplementary correction circuit. In the Master Sound TC system, a customized program micro-controls the oven in order to maintain the optimum temperature for each individual crystal to achieve its most accurate operating performance. This design keeps any circuit signal correction to an absolute minimum, thus providing the purest and most natural clock output, and by extension the cleanest and most accurate sound.
*TC: Thermo-Control

In the case of Esoteric’s new SC1 crystal, temperature characteristics are measured individually at the time of manufacture, and characteristic charts are produced for each individual unit. The SC1 crystal is then installed in the oven and based on its chart specifications, the oven’s microcomputer control program is individually customized to match the installed crystal’s optimum operating temperature in order to ensure that each and every crystal performs at peak accuracy. This series of operations is carried out meticulously over several hours, including individualized burn-in, therefore only a handful of G1X units can be produced in a single day

Heat cannot be conducted through a vacuum without some sort of gas component filling the space. Esoteric has developed an entirely new oven with its own vacuum flask (or thermos) structure. Through the adoption of advanced metal processing technologies created in world-renowned steel town Tsubame City, located in Niigata Prefecture, Esoteric was able to create a vacuum within the hollow of the oven’s outer casing that both minimizes temperature fluctuations inside the oven and the electrical energy required to drive the heater, thus further minimizing their effect on sound quality.

The heater developed to maintain a uniform temperature within the oven also epitomizes Esoteric’s singular commitment to the ultimate in sound quality. Unlike most conventional modules, which repeatedly switch their heater elements off and on in response to changes in oven temperature, the temperature control circuitry specially developed for the Master Sound Discrete Clock is constantly fine-tuned in real time by a new 128-step multistage heater control. This new design totally eliminates any potentially adverse effects on the oscillator circuitry caused by current fluctuations as the heater is switched off and on.

Four Independent Power Supplies for the Ultimate in Musicality

Normally, OCXO modules are equipped with a single power supply to drive all circuits. However, in order to ensure that all of the Master Sound Discrete Clock’s circuits are kept totally separate and discrete, the G1X is equipped with four independent power supplies to drive its oscillation circuitry, its heater, its control circuitry, and its buffer amplifier. An optimal voltage is directly supplied to each circuit block from each of these independent power supplies, with the result being significant improvements to sound quality.

The G1X comes fully equipped with the same Esoteric-HCLD buffer circuitry used in the Grandioso C1X line stage Preamplifier. This buffer amplifier features extremely powerful current transmission capability and a wide-range, flat frequency response of up to 180MHz, These characteristics greatly contribute to the output of a pure 10MHz sine wave signal to receiving units.

Depending on the listener’s preference, the clock output can either be individually switched to ‘Normal’ mode or ‘Adaptive Zero Ground’ mode, which drives the reference potential ground to 0V.

In addition to normal on/off function, the G1X features a ‘Preheat Mode’ that keeps its built-in clock module fully energized even when the power is turned off.

The G1X’s bottom chassis features sturdy dual-layer construction that mounts its power transformers and other components on separate layers in order to minimize interference between electrical parts, while high-precision slits were cut into its panels by laser. Any vibration generated by the power transformers is grounded to the exterior via the shortest possible distance from the unit’s pinpoint feet (patent No. 4075477, No. 3778108). Finally, the semi-floating top panel also helps accentuate the system’s relaxed and open sound.